1) Set a half-marathon PR of 1:21:29, mostly due to the fact that I had never raced a half before
2) Set a marathon PR of 2:58:55 on a tough-as-a-mother course also due to the reasons above
3) Improved half-ironman PRs (on same course as 2009's races) to 4:21:51 (4:49:00) and 4:23:33 (4:33:58) at NOLA 70.3 and WL Half, respectively.
4) Won my first two (and only two of 2010) bike races since College on the same night, garnering an astounding prize purse of 100 big ones. That same night, I rediscovered how badly I could make my legs hurt, twice!
5) DNF'd my first Ironman (and biggest race thus far) at Louisville, KY.  I've said it before, but that really sucked.  The rest of my year was kind of a letdown despite some good performances.  Motivation was low.
6) Won my first race: Cane Creek (Try Sports Developmental Series).  That was a fun race, no matter how I placed.
7) Competed in my first multi-day triathlon event with Woody, Fletch and Lisska and completed an Ironman (with extra swimming, gross) at White Lake.  While the locale was not ideal for multiple attempts the race was a lot of fun (but only in hindsight).
8) Discovered that I love swimming.  Sort of.  With certain conditions.  Depending on the day.  Potentially dependent on how fast I'm going that day.
9) Set several bike split benchmarks of 2:15:57 for the 56 mile half-ironman distance and 58:03 for the almost 40k distance (NOLA and Stumpy Creek).
10) Improved half-ironman run split by about 5 minutes to 1:32:17 from 1:37:34 (both at NOLA actually).
11) Compiled an amazing year in review list

Soon to follow: Part II will be "Where I stand right now?!"
Posted by James Haycraft at 7:48 PM No comments:

Not a lot to report this week other than on Sunday I hit my 26th birthday.  I missed one run this week but got in an extra ride (accidentally).  I got a little excited about having a new piece of cycling gear to use and geek out over (as if I needed more!).  This particular little item will hopefully allow both myself and my coach to really bring out the best in me in terms of my cycling abilities next year.  Not just my cycling abilities actually, but also my ability to run well off the bike due to better bike pacing in long course racing.  That way I can run like Woodbury and not like Behme!  Or maybe find a happy medium in between the two...
Posted by James Haycraft at 10:17 PM No comments:

Last week of being 25

I don't usually like to make excuses but I think this week's numbers were directly affected by my lack of ability to see properly on Monday on Tuesday.  Most people would like describe vision as their most important and dearest sense and when that is jeopardized everything else becomes less important.  When I was buying new contact solution last Friday I inexplicably chose the store brand when for the last 15 years I have ALWAYS purchased the "name" brand recommended to me by my doctor.  Apparently some store brands use different preservatives and as luck would have it on Sunday of last week I began to experience the downside of being cheap.

Monday was pretty bad as my right eye (and left eye as well but not as strongly) suffered an allergic reaction to the preservatives found in the solution.  Sunday had also been a pain but I assumed it was because I had stayed up late with my contacts in and so consequently wasn't overly worried about it.  I went to bed at 10pm on Monday night with the hope that sleep would heal all evils.  Consequently I did not work out at all on Monday.  Tuesday morning brought with it similar feelings and I realized I had to go to the eye doctor.  As much as I hate going to the doctor my eyes are pretty important to me and are worth keeping healthy.

Luckily, the fix was easy (steroid drops) and by Tuesday afternoon I was feeling MUCH better.  I went for a swim and then my week progressed as it normally would (except for less swimming than normal).  I crammed a bit with running (ran Wed-Sunday but had one double) only had one bike ride (~2 hours for 37 miles with 3x2 minutes of very hard work) but felt like I salvaged what could have been a much worse week (in terms of training and health).

On a happier note, it looks like I'll be joining the Cervelo squad for 2011 (sadly not as a sponsored rider - surprising I know - but as a customer) so hopefully my bike splits will to continue to amaze all those around me. 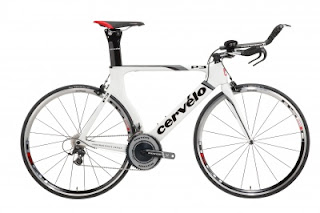 Posted by James Haycraft at 1:40 PM No comments:

Well, not a whole lot to report this week. My running went great; I had four weekday runs totaling 31 miles including one little "workout" of 4x400 in 1:28-1:30 done on the roads using my garmin as a guide for stopping and going.  Also got in a great long run with a huge group on Saturday morning at Mcalpine.  There were some faster miles in there but it was mostly a nice loping pace on the soft surfaces.

I inexcusably missed riding my bike this week; this is the first time all year where I haven't logged any saddle time at all.  I was supposed to ride on Sunday but due to the combination of several factors: allergic reaction in my eyeball (because I stupidly changed my contact solution), super cold day on Sunday morning, and last but not least staying up a bit too late on Saturday night.

Pool time was good but not great and I had one pretty stellar workout with Scott on Thursday.  Unfortunately on Thursday through Sunday the MCAC was closed due to a weekend swim meet so I missed out on all that time in the pool.  Gee darn!
Posted by James Haycraft at 9:54 PM No comments: