You read the title and you're probably thinking to yourself: "Oh great, James writing another stupid blog post about pro vs. ag" or something of that nature.

It's becoming increasingly clear that some things need to change with regard to pro triathlon. What galvanized this particular post was seeing some tweets by some professional women who raced New Orleans 70.3 this weekend.

Here is a good example:


Now, I've had nothing but respect for pro women as long as I raced as a pro.  I frequently found myself at the front of their race at the beginning of mine.  Luckily I usually managed to ride away from them but I completely empathize with their plight. When I came up on the front group (say, for example, after a swim where I was caught by the lead pro women, which happened in every pro race I did except for one) I attempted to not get involved and surge through and past them so as not to affect their race.  Sometimes the women seemed to pace off me (Amanda Stevens/Magali Tisseyre both did this at Miami 70.3) and surge past again. I can't really do anything about their choices as interestingly I rode the same watts to the turnaround and clearly they did not. Anyway.

Mocking the pro male in question in this instance, however, helps absolutely nobody. Saying "you don't belong" is like a smack in the face.  Maybe he had a bad swim? Maybe a botched transition. At the end of the day he is there because he qualified to be there.  He followed USAT's qualification standards, submitted his application, and became a professional triathlete.  I have no idea who the male athlete in question is but to verbally berate him in that way shows relatively little class. It does NOT move the sport forward in any way.

HE is not to blame for the general problem that is being referred to in that tweet. Maybe he rode in an unpredictable manner and interfered with the women's race and yes, that sucks. But he was there because, in the eyes of USA Triathlon, he deserved to be there.

So the ultimate question is, SHOULD "he" (or anybody like him) DESERVE to be there?  There are plenty of pros who would be subject to this issue.  I was one of them.  Every single male pro that lives in NC is probably similar, with maybe one or two exceptions and those two grew up swimming.

So, at the end of the day, should the qualifications be stricter? Yes, probably. The current dynamic in pro triathlon is kind of stupid anyway in the sense that there is little to no room for athlete development.  There are some big races and there are very few little races in terms of financial compensation which creates an issue for those pros that maybe have the chance of becoming better but will never get it because there's no validation out there.

At the end of the day, when it comes time for competition, everybody's tempers are on edge. When you're competing at the front of the race you have little time or desire for someone else's bullshit.  I get that. But being rude and condescending is, in no way whatsoever, the proper solution.

The lead AG waves could also make the same argument against the BOP pro women.  They are competing for World Championship spots and the women in question in that situation are competing for something else (but probably not financial compensation).  They are under different rules so it gets even more confusing in that context.

Something needs to change, but what is it?

Posted by James Haycraft at 10:24 AM No comments:

So it's been a few weeks since my last post on this space and at this point I'm simply embarrassed. I've wondered recently whether this type of thing changes for everyone that blogs; at a certain point it just moves lower on the priority list...? I'm sure it does.  Either way, I don't want to succumb to the popular trend of giving up on my own self-congratulatory blogging. Maybe I'm just not doing as much critical thinking lately, which means I have less to say and am - generally speaking - less opinionated...

But we all know that's not true..

My last post was about the first race of the year and since that point I've actually raced a couple more times.

Last year Behme and I completely missed the boat on signing up for 6 hours of Warrior Creek. We did a much more technically oriented event up in Virginia that weekend instead. It was an eye-opening experience and we resolved that next year we'd be more prepared.  Well, next year came and Warrior Creek was done and it was fantastic.

The atmosphere of the race was spectacular, the weather was perfect, the trail was in primo shape...really you couldn't have asked for a better day.  Behme and I managed to turn out some good lap times and ended up 8th in our category (duo male open).  The laps that some of the winning guys were putting out were just staggeringly fast.  For example, my fastest lap was a 1:02 and some change for a 14 mile loop. I was pretty pleased with that, especially considering it was my last lap. The fastest lap recorded that day was 55:xx.  That's over 15 mph....on TRAILS! 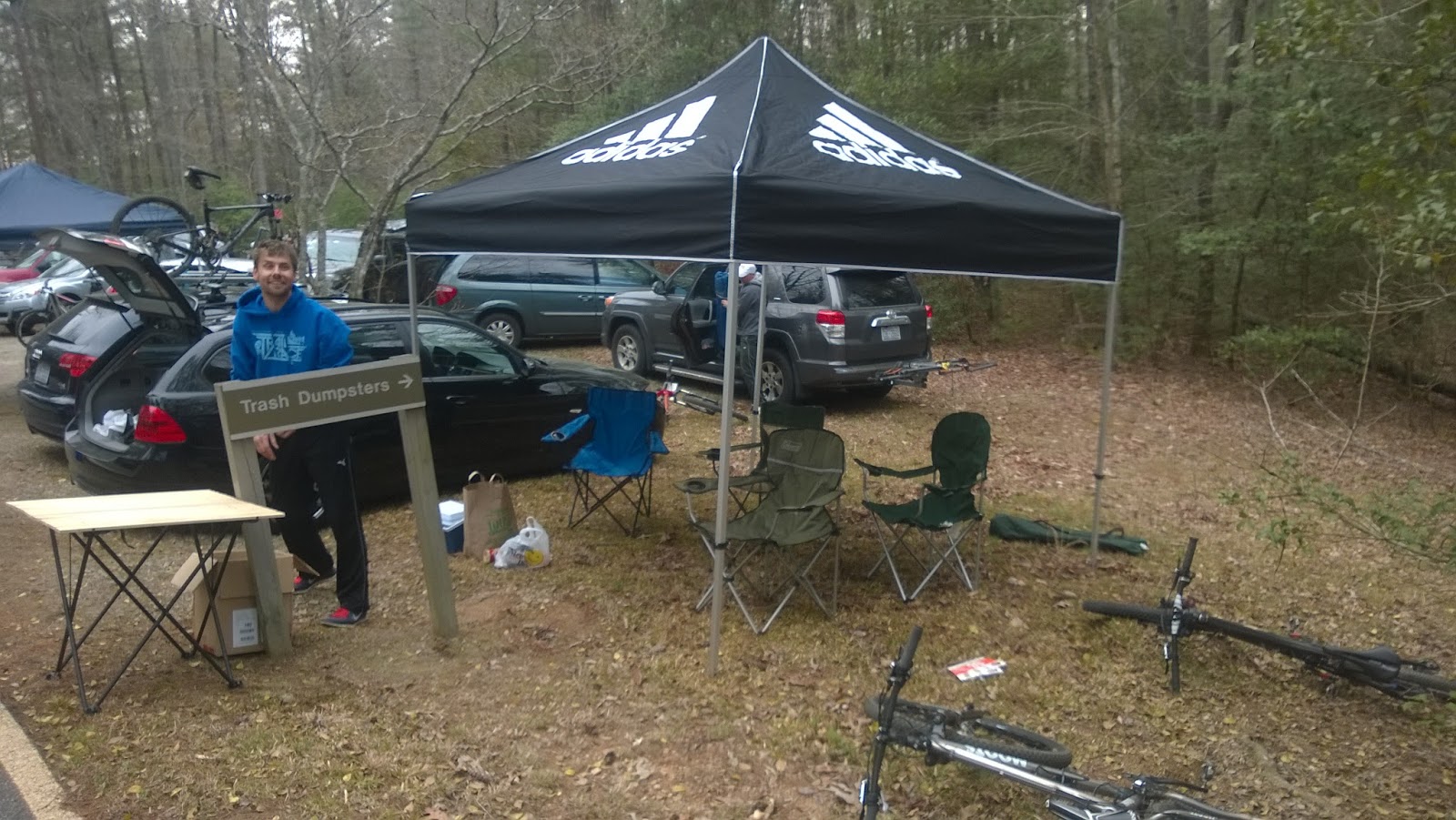 I'm a broken record in saying this but if you haven't gotten a mountain bike or tried mountain biking you really, REALLY need to do it. You will not regret it.

Also since Hickory Knob I've gotten fully into the new scheduling with David and it's been really fun learning some new skills and sort of getting back to the "roots" of fitness.  It's odd but also extremely refreshing to feel that I am not at the limits in terms of my time management and I can focus on each workout a little bit better to get the most out of it. I think that come Ironman Louisville I am going to be a different athlete altogether. It is exciting!

This most recent weekend (i.e. yesterday) I also did another bike race. The biggest weekend of bike racing in Charlotte came and went with the Dilworth Crit Saturday AM, Amateur Shootout Saturday PM, Novant Criterium Saturday PM, and Belmont Crit Sunday.  I chose to only do one: the Belmont Crit.  It was a tough course and I had a very difficult time managing the uphill half of the course 300-400 watts for 30+ seconds mixed with the downhill half of the course (mostly coasting for ~60+ seconds with a few turns).  My system is not really good at that type of thing anymore (if it ever was!).  I managed to hang until the last 5 laps, at which point I was dangling off the back a bit.  At 2ish laps to go I looked back and realized that everyone behind me had pulled out so I essentially cruised it into the finish.  It was a mixed 2/3 race and I was 18th overall but I am unsure of my place among cat 3's. I doubt it was much higher.

It's clear that my energy systems are better suited to flat road races!

Until next time...
Posted by James Haycraft at 10:04 AM No comments: