Trying to toot my own horn, but likely failing

I was just perusing my training log and since I'm coming up on (close to) one year of regular exercise - at first running but then biking and later swimming - I thought it would be interesting to look at what I've accomplished in that time span. Speaking purely in terms of hours and miles/yards (later on in the year I'll list some performance accomplishments that I think are noteworthy...and I'm sure it's only me who thinks so)

- I ran 1,703 miles, averaging 35.5 per week. Haha, I think it's funny that I have run more than I biked in the past 11 months. Kind of sad. My average run has been 6.5 miles (paltry). Keep in mind, however that I rarely run more than 6 times per week and have taken (combined) several weeks off for injuries and/or down time. Not too bad.

I don't feel particularly beat up, but it does make me a little tired looking at all that. Funny, because relatively speaking it's not a very high amount of training. I'm sure, if things go according to plan, that 2009 will be more intense.
Posted by James Haycraft at 7:43 PM No comments:

I discovered today that I really only listen to Eminem when I'm frustrated or angry. Unfortunately this realization didn't enlighten me as to why I'm currently frustrated and/or angry but at least now I know. Eminem used to be an anytime kind of music for me to listen to but that started changing towards the end of junior year and my musical tastes completely shifted senior year. I guess "Lose Yourself" is still a good pump up song but all the stuff of his that I used to listen to regularly has now pretty much been relegated to the "F*** the world" mood swings.
Posted by James Haycraft at 10:00 PM 1 comment: 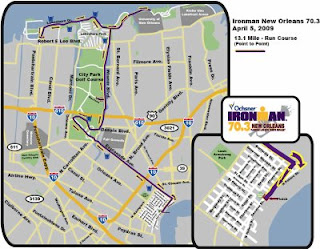 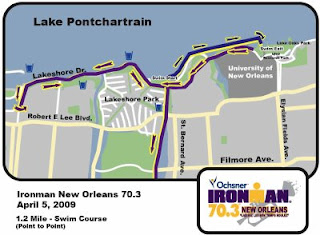 No, it's not a full Ironman. I'm not ready for that kind of challenge. The 70.3 distance is much more realistic for me at this stage of my athletic "career."

It consists of a 1.2 mile swim (~1900m), 56 mile bike ride, and a 13.1 mile run. The swim is in Lake Ponchartrain (gross). The bike goes east from there on an out and back loop and the run takes you South towards downtown New Orleans finishing in Jackson square (pretty badass if you know the area).

A lot of effort will go into getting ready for this shebang, as I don't want to waste money (225 to register! yikes) and I want to really lay it all out there when I [hopefully] complete the race. I won't post any time goals for a while, but just know that they're ambitious. Which shouldn't be a surprise if you know me.

There are 2 slots for Ironman 70.3 World Championships available for 18-24 year olds. That'd be a fun prize, but I'm fairly sure that it's not very realistic, unfortunately.
Posted by James Haycraft at 9:49 PM No comments:

Role Models: go see it. That's all you need to know.

Not too much in my life that I would describe as 'eventful' right now. Work has been normal, albeit with more 'responsibility' so far than last year. I expected this, so it's nothing surprising. It's also one of the reasons I decided to do a second year.

New training program has been going on for 7 weeks now, with nothing special to report on it besides the fact that it's going pretty well. My AC mile has gone from 7:45ish to 7:00 or so. I'm up to 45 miles and by the end of next month will be up to 55. I'm not sure when I'll stop increasing my mileage, as I kind of want to see how my body reacts to 60, 70+ miles before I figure out where I'll just maintain for a bit. Should be fun.

I've been playing a fair amount of the new Guitar Hero: World Tour and it's definitely better than 3 (Legends of Rock). It's a little easier (so far) but definitely a better overall game. Gears of War 2 is also a better game; deeper story, better graphics, and more intuitive gameplay all add up to a very solid sequel.

Very exciting post, I know.
Posted by James Haycraft at 2:46 PM No comments: