So the GreekFest 5k is a pretty fast one going by the results. It always amazes me when old people (basically anyone over 30, duh) are still ridiculously fast. I hope I don't get stop exercising, but given my penchant for laziness it totally could happen. Oh well, I'll still have that irresistible charm regardless of what happens.

The winning time for men was 15:24... This dude was running a 4:58 pace for 3.1 miles. That's ridiculous. For all those runners out there who I've ever maligned I apologize. No matter which way you cut it, 4:58 is effin fast. I'm jealous.

Before the race I noticed a couple of really good-looking girls at the start so I was hoping to impress by being totally awesome and fast; I don't know what happened to one of them but the other almost won the women's division. So that plan didn't really work out. A lot of people were running with ipods, which I didn't really get...I mean training with an ipod is cool but in a race I feel as though one wouldn't want to be distracted by music or even unable to hear people right next to you in the pack. Strange, but everyone is entitled his or her druthers.

The results page is at

I ended up 61st overall (men and women) and 53rd out of 426 men. I was 4th in my age group (20-24) out of 17 total. I'll take that. Immediately following the race I was pretty pissed about my time but I'm more than ok with it now. It's something that will only improve if I keep working.

I enjoyed the race so much I signed up for a labor day 5k in Gastonia, NC (about 30 minutes west of Charlotte). Should be entertaining.

The other AmeriCorps and I went out for the first time together last night and I got tipsier than I expected to. Embarrassed myself I'm sure but who really cares...it's what I do. And I'm a champ at it.
Posted by James Haycraft at 5:50 PM No comments:

In all fairness, running is not nearly as easy as it's made out to be. Simply putting one foot in front of the other at a relatively fast pace all while keeping your balance, tempering your breathing and making sure you don't run into anybody during a race is quite difficult (at least for me). No, I didn't fall or make anyone else fall, but I learned a lot about myself.

The GreekFest 5k is - according to its sponsors - one of the largest and fastest 5ks in Charlotte. Now, I don't know whether or not that is saying much but winning times for men have been in the low 15s for the past several years. According to my book, that's fast. Really fast. Going into the race I knew I wasn't even going to come close to competing for an overall position (and boy was I right) but I wanted to post something pretty respectable; something I could be proud of.

Going by my pacing during my training runs for the past couple of weeks I thought there was a realistic chance that I could run between an 18 and 19 minute time. I even thought I could post something around 18:30 in an ideal situation, which meant something that was completely flat. I'm much, much better at running on flats than any sort of hills, be it up or down. I'm sure that's not a unique characteristic but it seems to be even more pronounced of a difference for me (maybe it's just mental, who knows).

Anyway, the course was not hilly but there were some pronounced inclines on some of the sections. I wanted to try and pace myself to run about 6:30 for the first 2 miles and then kick it up for the last ~1 mile. Unfortunately, it didn't exactly work out like that. As in (seemingly) every. single. race I've ever done (cycling, obvi) I tried too hard at the beginning to stay near the front of the group. For the first 2 miles I was in a group of about 50 people (mostly guys but there were some women as well), the front of which was about 150-200 yards in front of me. I paced myself behind this guy in a yellow shirt for those first 2 miles but then my effort had to increase exponentially just to stay with him during the last mile or so. I tried for too long to stay with that guy (who I imagine ran somewhere around an 18:00) but in the last 1000 meters or so I just couldn't do it anymore. I began to feel lightheaded and my breathing got very ragged. Up until then I had been keeping my breaths nice and even but it just reached a point where my legs were screaming for more air.

The last 500-600 meters were definitely the hardest. The pressure to finish well was exaggerated by the (literally) hundreds of spectators lining the course for the last bit of the race. I tried to do a kick at the end up but it was mostly futile, alas. I finished with a time of around 19:30 going by my watch, although the final results will be more accurate given that everyone was wearing those timing chips.

All in all, it was fun; now I have a time to build on and hopefully I'll race again within the next month. Whew
Posted by James Haycraft at 8:28 AM No comments:

So my move to Charlotte was accomplished with very little fuss; the living arrangements are much better than expected, which is always a big plus. There are four apartments, each with four single bedrooms and one common area that includes a well-equipped kitchen and a living room. The bedrooms are long and skinny but I've managed to make mine look quite nice, if I do say so myself.

One thing I am definitely going to have to do is get some more posters because I hate having drab white walls. That's one of the things that really could have used some improvement last year in ol' 1418-A. Luckily I have a couple of totally awesome Lance posters waiting for me in the old apartment that I just have to get at some point, along with a ton of kitchenware.

I will get a digital camera sometime soon so I can take some pictures. Hopefully. I also want an xbox 360 really bad but that's just a little bit more expensive.
Posted by James Haycraft at 8:49 AM No comments:

So, because I'm bored and quite literally have almost nothing else to do besides watch baseball and read I decided I'd put my training results up here; not in the expectation that people will read it and/or be interested by it, nor to brag about how many (or few) miles I've put under my belt (believe me it isn't very many), I simply want a place to look and see how I've done. That's it and that's all, just for fun. I know any runner who has more experience would see the miles as trivial but I'm moving slowly because I don't want to get injured and I am new to doing weeks of 30+ miles.


So, while I've put in the miles I haven't yet hit the pacing the way I would like... I know that on most of these runs my pace outside of the warm-up and cool-down has been right around 6' 30'' but I haven't yet figured out how to do splits on my watch so that's somewhat useless information given that I'm not even sure whether I'm right about it or not. I also feel as though I have a tendency to be anaerobic for way too much time given that most of these are base fitness-building runs and not tempo or interval workouts. I tend to make these into something similar to a fartlek but mine are even less organized than your typical fartlek workout. One of these days I'm going to get the guts to go ahead and just run for an hour but that's a big mental hurdle as I've never been anywhere close to that on any run I've ever done before. I think the closest I've come was somewhere around the 45' mark on a treadmill.

It's also averaging about 100 degrees (110 heat index) in New Orleans during the mid to late afternoon when I'm running so that certainly hasn't helped my times or my mileage. I would guess that by the end of the run I lose (seemingly) several gallons of sweat and body weight, which isn't a very pleasant thought. I'm hoping that once I move up to Charlotte the temperatures will become slightly more mild.

I've also unfortunately been getting slower as the week has gone by. Monday felt like running around with 50 pound legs and my knees didn't feel 100%. Time for a rest day.

One of the cooler things I've discovered with running is the awesomeness that is Google Earth. It's so easy to map out runs and find distances that it's almost hard not to use. You can waste a lot of time just sort of browsing around on that program. Scary to think that if commercial satellites have imagery that good how much better must government satellites be?
Posted by James Haycraft at 9:30 AM No comments:

So instead of signing up for bike races in order to fill time over the next year, I've decided to (as of now, at least) give competitive running a try. I know, I know. Running is a sport usually reserved for people who just aren't good at anything else due to their extreme lack of hand-eye coordination or overt obsession with body fat percentage and aerobic thresholds. 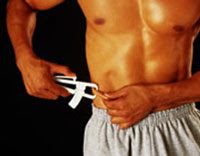 Along those lines, I signed up for my first 5k a couple of days ago in the hope that I could get some small satisfaction after doing well in a totally different kind of race. Having never run competitively before (even in middle school or high school) I don't really know what to expect come 'race' day. My history with cycling has promoted the idea that I can just sit in the pack and wait until the final sprint to shake people off my wheel and come out with a good result. That is, of course, a sweeping generalization but the point is that I am positive that I will finish this race and be completely exhausted - something that (I think) doesn't happen quite as much in cycling.

Adding to my complete lack of knowledge on the subject is the fact that I have never (as far as I know) run more than 20-30ish miles in a week, tops. I know a 5k isn't a very long race but, as with cycling, I'm confident a base fitness helps a great deal. Training with the goal of doing well - in my age group - is a complete different type of running for me. In the past it has been running with the goal of getting in shape for intramural sports or cross-training for cycling. I've never run more than 5-6 miles in one outing, having usually limited my runs to about 3-4 miles or 30ish minutes. So the idea of doing a 7-9 mile long run once a week is quite daunting, to say the least. Especially considering I've never figured out how to pace myself adequately for anything lasting longer than 30 minutes. For me it's always been about intensity and never volume. Even when I was biking regularly that was mostly the case.

So, with about 2.5 weeks before the first race of my budding running career, I have a lot to learn and a lot of training to do in a very short time period.

This will be me after the race... 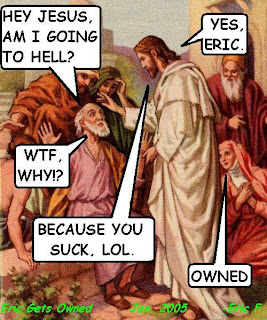 Foxtrot....
Posted by James Haycraft at 9:53 PM No comments: