Charleston doesn't have any noseless saddles

Besides being a great place with good food, beaches, sun, and long flat roads...Charleston is a place full of something very odd when it comes to the triathletes that call it their homes. The reason for this phenomena is not clear other than to say that it's likely rooted in the fact that there is no strong triathlon retail presence in Charleston or the surrounding areas.   Well, to be honest, there may be some retail presence but the possibility that the fitting services provided by the various retail locations is sub-par.

Nobody in Charleston is riding a noseless saddle. Well, almost no one. It might as well be no one, honestly. Go to a triathlon in Charlotte and you're very likely to see what may almost be a majority of noseless saddles at this point. I haven't taken a survey and I don't have the desire to do such a thing but I would be willing to bet that I am right.

This stood out to me in no small part due to the fact that on Sunday at the sprint race I saw a great many people in what I would consider to be "sub-optimal" triathlon positions on their tri bikes.  Many were quite upright, they looked uncomfortable, many weren't in their aero bars even early on in the race (flat/safe roadway), lots of steerer tube spacers, etc.

Now, there is nothing "wrong" with this exactly. As I tell many people, there are many different ways to get from T1 to T2. I do very strongly believe, however, that if you are purchasing a bike that is expensive (of course, "expensive" is relative) then the REASON you are doing that is because you want to be more competitive.

A road bike is kind of like a swiss army knife.  It's got a bunch of really great tools and knives that will accomplish just about any task you set for it. A triathlon bike is like a samurai sword; it is good for one very specific thing.

Or maybe: a road bike is like a pickup truck. A triathlon bike is like an F1 car. Sure, you can race the pickup truck on the track but...well, it's not going to be as fast. But that F1 car can't do anything else but blister that track.

From a general purpose standpoint I VASTLY prefer riding my road bike. It's more comfortable in many ways (at least, insofar as it concerns general purpose riding), it's more dynamic, it's very nice, etc. But I purchased a tri bike to go fast between T1 and T2.

Here is the problem that I have with Chaaaahhhlestun triathlon positions:

They could be sooo much better. The first person who brings in a great position on a noseless saddle to their little circle of friends is going to be a trendsetter for the whole community.

This is John Howard; he used to be the man. In the second picture he is riding the bike in what I would deem a "triathlon appropriate" position. His body is steeper "over" the BB, his shoulders are more forward, etc. I think in the second picture he has become reach-limited to an extent but the point of his picture was a demonstration of the different posture one "should" hold on the bike.

Now, in the olden days, you were supposed to ride like this (the second picture) on a "traditional" or "nosed" saddle. Guys could get away with "picking a side" and rolling their hips forward to achieve the desired pelvic angle and overall body position.  Ladies, however, do not have the luxury of "picking a side." In their world there are NO sides. So they were left either suffering through it or sitting back on their saddle with flat hips... 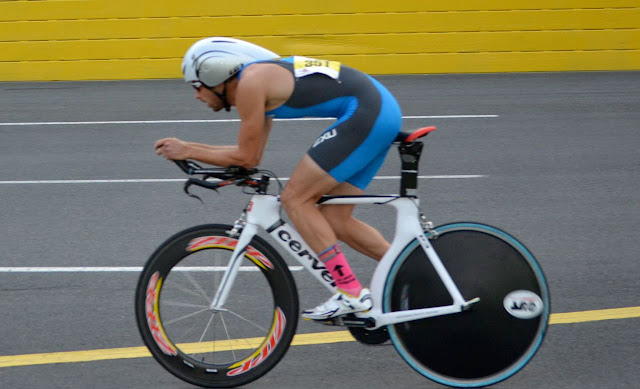 You can see in this picture above that somehow I am riding the most forward 2-3" of my saddle. I am likely selecting my right seat bone as the main support mechanism but unfortunately I am also 100% sure that much of the "middle" soft tissue is also sustaining a lot of pressure.

As I have mentioned previously, the goal of a good triathlon fit centers around SUSTAINABILITY. So in the picture above I am

But that is NOT sustainable. It has nothing to do with any of the "normal" issues associated with "bad" triathlon fitting is revolves completely around the fact that the saddle is putting a ton of pressure on soft tissue. On guys this leads to numbness (which is not a comfortable feeling in that and the more frontal area...), on girls this leads to not sitting like that anymore due to potentially extraordinary discomfort. 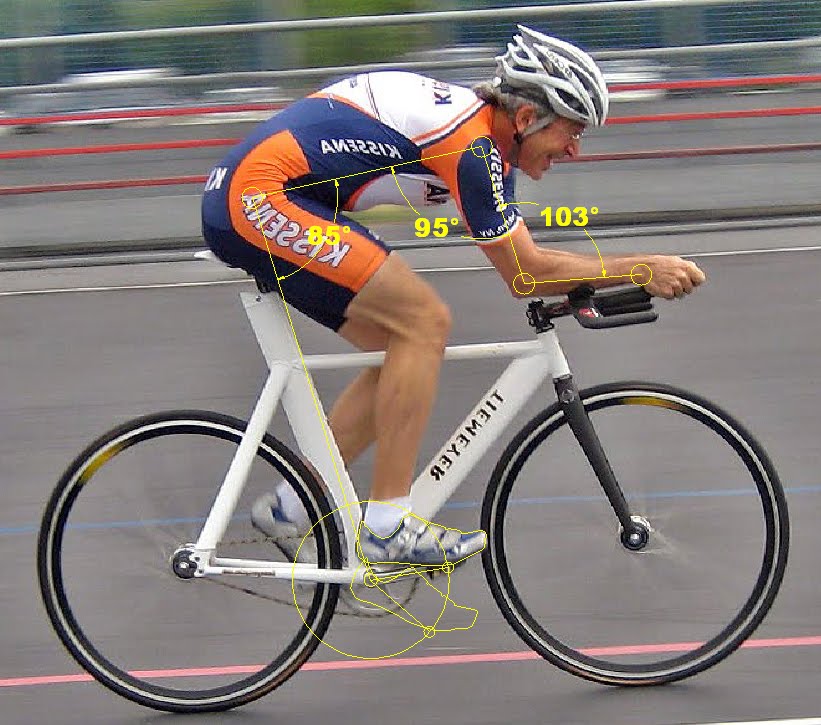 They sit like this guy is: backwards on the saddle (because that's the only position that's sustainable from a "comfort" standpoint), hips rolled "under" them, lots of torque/tension in their middle and upper back, etc.

Once you provide someone with a proper support system and instruct them on how best to utilize it, however, you can take someone that is COMPLETELY new to triathlon bikes and the position and get them more like: 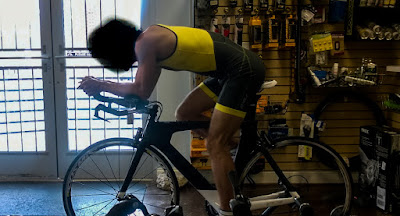 It all starts at the saddle. Everything good and bad that is fit related likely has its roots somewhere in and around the saddle area. I cannot overstate that.

Chaahhhhlestun needs some noseless saddles injected into its triathlon community, STAT.
Posted by James Haycraft at 7:59 AM

I suppose Behme is from charleston then