Are you ready for a little demonstration? I hope so. It's going to be great. Seriously, it really is.

When it comes to triathlon and bike-related purchases, I try to boil it down to one very simple question:

"Is this going to make me faster or not?"

It really is that simple. Well, actually that's not true. I also ask myself:

"If not, does it look REALLY FRIGGIN AWESOME?"


So somewhere within those two parameters is where I try to establish a context for everything having to do with the bike insofar as triathlon is concerned.

Admittedly, most things seem to actually both be faster (probably) AND look pretty sweet.  Of course, sweet is a relative term, but I'm always right about what looks best. Probably.

Me myself and I make up about 90% of the system drag on a triathlon bike. That is true, generally speaking, of everybody on a bike. Your body is the main limiter in going fast. That is both true physiologically and physically.

Each position change (and I'm kind of including bike purchases in this because the bike itself is somewhat irrelevant in this post) must meet several criteria:

So let's say we've already got you well supported (you like your saddle and it allows you to do what you need to do to achieve the position you want) and all the contact points have been set. What next?

Well, you've got to learn how to HOLD your body.  You can adjust contact points (armpads + saddle basically) all day long and gather all kinds of data but at the end of the day if you don't know and aren't told how to hold your body...you're up a creek without a paddle.

I'm going to use our favorite Nascar driver Landon Cassill as an example (and I don't think he'll mind, hopefully!).  Landon has been an extremely attentive student of the bike world. He quoted the "rules" at me one time, which makes him A-OK in my book.

He has made the realization that if you want to go fast[ER] (or you can think of it as making your life EASYer] on the bike) you have to subscribe to the law of marginal gains, so to speak.

So he's made a lot of good choices. He gets good mph for his watts/weight. He's thinking to himself "Hey I'm pretty aero."

But, what Landon didn't realize was how his body position (the way he holds himself on the bike) was potentially affecting his overall aeroness. 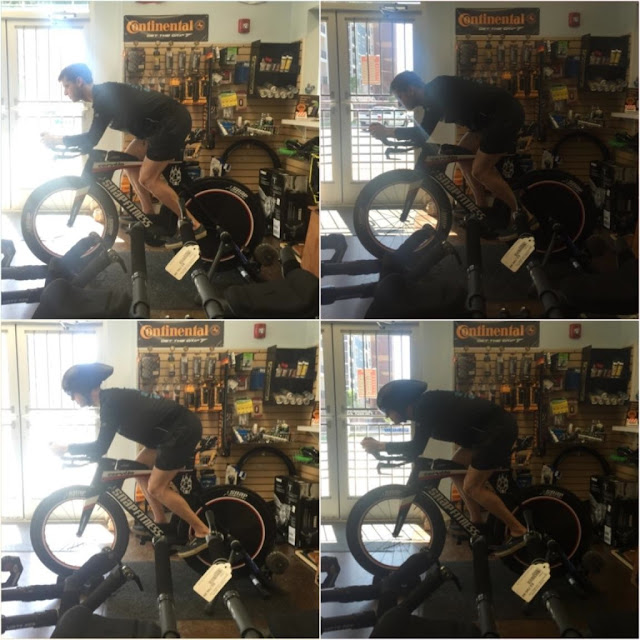 On the left you'll see a "normal" position. That is how he got on the bike and just sort of "settled" into an everyday, no problem position. Overall it's quite good considering Landon's really only been riding the bike for a bit over a year. From a contact point standpoint we could maybe have a productive discussion about removing one or both of the Aduro spacers under his bar.

But the real noticeable thing is how different these two positions are in terms of their system efficiency. Nothing contact-point wise has changed between these two sets of pictures. Nada. The only thing that's changed is basically how he's holding himself from the mid-back and "up." He's thinking about "sinking" into the armpads, relaxing his shoulder blades together, tucking his head a little bit. And the difference is HUGE. From an aerodynamic standpoint that change is probably worth more than having a P5 vs. a P2. Almost certainly, in fact.

And nothing has really changed on his bike. The ONLY thing that's changed is how he's aware of what his body looks like when riding.

Admittedly, the right side of the picture will take some practice to get used to. To be aware that you're holding your head "correctly" and to be aware that you need to "sink" (I use those terms because they work for me but whatever promotes those types of feelings is the important part) into the bars. Let your little bitty support muscles stop working so hard and rely on the big stuff (BONY support) to hold you up. Train those neck muscles so that you can ride whatever the duration of your race may be.

Posted by James Haycraft at 8:18 AM