A state TT title, among other awesomeness

Most of this week was just a preamble to the weekend (is that not the way it usually works out?). Blah blah blah swimming, biking, running, sleeping, working, etc. Then, awesome ensued.

As an aside, I get the feeling that a lot of people think I'm seriously thinking I'm the awesomest person out there.  This is not true. Gandhi was way more awesome than I'll ever be. You just need to have a sense of humor about a lot of things I say.  There's this thing that exists and I'm not sure many are aware of it that is colloquially known as "sarcasm." Generally, the more obtuse you are the less you are able to pick up on such things.  I can't write everything in pink font, sadly.

On to the recap (yayyyy).

I had, several weeks before, decided I did not wish to do Tri Latta. I love that bike course, but the rest of that race is - quite simply - completely unattractive.  It is so close to home that it is nearly impossible to pass up on but I managed it this year.  I would not be subject to its whims!!! So long ago I looked for a race that would substitute and lo' and behold I found one: the South Carolina State Time Trial Championship in Awendaw, SC (near Charleston). Not wishing to simply drive down by myself, do the race, and come back up immediately following I enlisted the help of two friends (would've loved to have had others but I fear many people are intimidated by the time trial or subject to the pull of Latta), Jenny and Ross.  It would be the first 40k time trial for both of them.  I told them to not be intimidated by the equipment of the roadie-verse.  They pay wayyy more attention to that sort of stuff than triathletes do (generally). 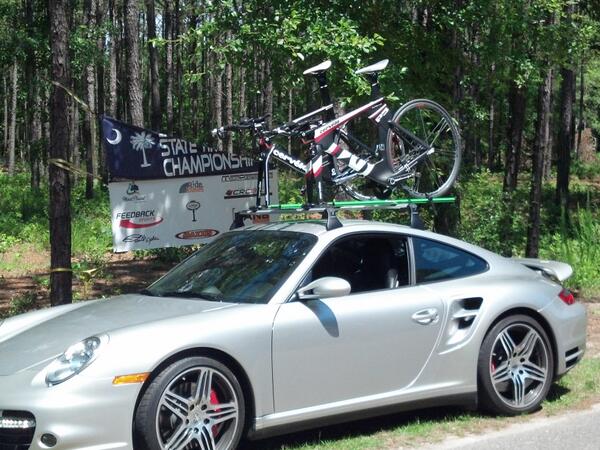 Yes, that is a Porsche GTsomething...(3?).  Yes, that is a P5-6 with Campy Super Record.  Yes that is ALSO a P4.  Both had sick wheelsets.  The P5 guy came in 5th I think so it's very slightly almost justified.

Anyway, we made ready. Jenny started first, I started later and Ross started even later.  As I made my way to the start line I was confident that I was about to go fast.  I am on - quite literally - the fastest bike in the world.  I have - quite literally - the fastest wheels in the world.  I am wearing - quite literally - the most awesome skinsuit that makes me look even more awesome.  I have an awesome helmet (although I genuinely don't know if it's fast or not on me...maybe I should book time at the wind tunnel in the next couple of weeks....hmmmmmmm).  I put on shoe covers.  I spray-glued my bib number to myself instead of pinning it (saves some watts right thurr!).  I checked ALL the boxes.  I have a super fast, low rolling resistance, aero front tire.  I have a super fast, low-ish rolling resistance, slightly more durable rear tire that is also aero (for next TT I will likely change my tire selection).  Latex tubes OF COURSE.

I set off on my journey.  I could tell that I was rolling along and I was able to keep my head down and grind out the watts.  For the first 10' my watts were a little high but I could tell there was some slight head/cross wind so resolved to hold the effort level.  The second 10' saw my power drop a little bit but the pace continued to be high and the effort was starting to show.  I was perspiring quite rapidly at this point (a 3/4 sleeved skinsuit is not the coolest piece of apparel) and my legs were burning.  I made it to the turnaround and was glad to get the first half over with in roughly 27:52 and put my head down to continue the back half of awesome.

At this point I had basically passed everyone that started in front of of me within about 3 or 4 minutes.  But I saw some carrots up ahead and this helped me pick my power back up after a slight drop leading into the turnaround (and by slight drop I mean the 7.75' split from 20' to the turnaround was 10-12 watts lower than the one before it and the one after it! oops).  At one point there was a woman up ahead riding in the middle of the lane and I was catching her quite rapidly.  As I got closer she moved even further left and to stay in my lane I had to pass rather close.  I was closing the gap so quickly (seriously, I was probably going 28-29mph and she was maybe going 15 it seemed like) that my shout at her was not really in enough time and she let out a very loud squeal as I came rumbling past.

The last 20 minutes of the race were just a symphony of delicious suffering.  The last 10k had a fairly sweet tailwind so consequently there were some high speeds seen on the bike course.  I crossed the line and my garmin read 54:56 for 25.0 miles.  A very solid split.  Leading into the race I was not expecting to be top 5 as I figured with a flat, fast course like that there would be some big TT guns out there but after waiting around on results it turns out I was the fastest overall on the day by less than 2 seconds! I was pretty stoked.  Eric Christopherson is a beast and I'm sure he was kicking himself after the race.  I know he could've found a couple of seconds on the course (I could've as well, no doubt) but that's the beauty of an individual time trial.  It is all about your effort over the bike course.  You never know until the results are posted!  Ross and Jenny both had crazy times too and I have absolutely zero doubt that if Jenny were to give bike racing a try she would be the best racer and TTer in North Carolina.  Nobody I've ever ridden with even comes close to her ability to suffer.  Ross' 57:20 or thereabouts was a super first time 40k split! He has put in some serious work on the bike and is really devoted to improving not just his fitness but the way he approaches racing and training.  He reminds me a lot of me when I first started working with Brian back in 2011 actually...

Unfortunately I was not the SC State champion in my category as I am not a SC resident! But the NC State TT is less than a month away...
Posted by James Haycraft at 9:13 AM